My initial plan was for this to be a four-part series. However, Part 4 turned out to be far too long so I am presenting it in two segments. This post will focus largely on issues and problems related to the Kansas Senate races. Next week in Part 5, I will outline concerns that relate to all races and the party as a whole.

As I have continued this series, I have been contacted by a number of folks cautioning me about engaging in this discussion. Some were earnest, caring folks who agree with my perspective but wanted to make sure I realized that I could receive substantial anger and blowback as a result of voicing these issues. Some simply think it’s wrong to talk openly about issues. Others were subtly trying to get me to go easy on certain folks and not burn any bridges.

As I have said, my intent is to bring to light issues and problems that need to be understood and addressed. Throughout my life, I have been committed to fighting for what is right. My honesty and integrity are not negotiable. My goal is not to burn bridges but, if some are burnt as a result of my posts, I hope the resulting fire will light the way toward positive change.

The Travesty of 2012: No Senate Coalition

We were unable to prevent a conservative Republican supermajority in the Kansas Senate. Sadly, we had seven Senate candidates who received between 45–50%:

If we as a party had done everything we could to support all these candidates, this result would be easier to accept. However, this was not the case. Some of these candidates received substantial support while others received little to none. I believe, if the leadership had made better decisions about resource allocation, we could have won more of these races. 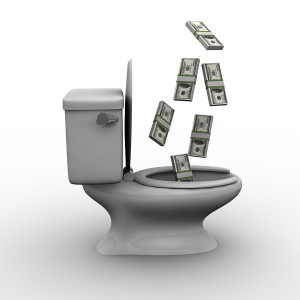 Given that our resources are limited, using them wisely is critically important. This requires devoting resources when they can make a difference, not using them when they are not needed, and using just enough for races that need a boost or an insurance policy. In the most recent election cycle, there are a handful a races that I believe drew over-investments.

One such race was in the 6th Senate District. Senator Pat Pettey was facing former Senator (and former Democrat) Chris Steineger. Given that Wyandotte County is far and away our biggest Democratic stronghold in the state, Democrats usually win and sometimes do not even have Republican challengers. This often means that party resources are not needed to win. However, this race was a bit different as our candidate was the challenger and was running against an incumbent who was formerly a Democrat.

According to the Kansas Governmental Ethics Reports, Pat Pettey contributed a total of $30,100 to Democratic committees. In contrast, looking at the reports from all groups who provided support (Senate Democrats Committee, Democratic Senatorial Campaign Committee, Kansas Democratic Party, and the Bluestem Fund), Pat received approximately $93,504 in campaign support. These expenditures total $63,504 more than her campaign invested.

For those who are interested, I have detailed information about contributions and support here. Total support can only be an approximate figure because of the way expenditures are reported. In some cases, the total amount spent for a group of several candidates is all that appears on the report. I personally think this is a bad practice because it prevents a full disclosure of candidate support as we do not know the exact amount invested in each candidate within the group.

Pat Pettey won this race by 24 points (62% to 37.9%) which is well beyond a safe margin of victory. This result clearly shows that the leadership substantially over-invested in this race. We did not need to spend $93,504 ($63,504 more than Pat contributed) in order to have a victory in the 6th District. I frankly wonder if we needed to spend much if anything beyond Pat’s investment. For a group that claims to make reasoned decisions based on polling, this appears quite illogical and unwarranted. If we were winning this race handily (as some have told me we were), many of these resources should have been used to support others in more competitive contests.

Senator Pat Pettey was certainly not alone in receiving support far beyond her own contributions. At this point, some of you may have the impression that all candidates who make contributions and “buy into the coordinated campaign” receive this level of support. I assure you they do not.

To illustrate both these facts we need only contrast two Johnson County Senate races. Our candidate in the 21st Senate District, Juanita Roy, contributed $44,000 but received approximately $89,337 in support while Kyle Russell who ran in the 7th District contributed $56,500 and received approximately $57,209 in support. So, Juanita was given approximately $45,337 of support beyond her own contributions while Kyle received support that was virtually equal to his contribution. Detailed data are outlined here. You will noticed that Kyle contributed significantly more than Juanita or Pat but received by far the least support of the three.

I wonder how many percentage points the additional $45,337 in resources spent on Juanita Roy’s race afforded her on election night and if these resources might have given us success in other races. Sadly, this investment turned out to be a failure. I find it difficult to believe that these ample resources would not have pushed us over the top in other races, particularly in those that were lost by an extremely small margin, such as Steve Lukert in the 1st and Tim Snow in the 25th.

I don’t expect others to run my campaign. My preference is to be extremely independent (much more so than some would prefer, in fact). I crafted my campaign plan and my team and I marched forward executing the plan. By early October, things were going extremely well. Responses at the doors were very good and I was receiving a great deal of cross-party support.

Because of this, I decided to pay for a poll to see where I stood. By October 16th, I had the results which showed I was 3 points ahead (margin of error +/-4). This, of course, meant I was either slightly ahead or the race was a dead heat but certainly winnable.

Shortly thereafter, I shared these results with Minority Leader Anthony Hensley, Tim Graham (Chief of Staff for Senator Hensley), and KDP Executive Director, Jason Perkey. I knew that every race was vital during this election cycle. I thought everyone would be pleased to hear about the poll and might want to make investments in my race to preserve my lead, in order to give us a much needed win on November 6th.

I was asked by both Tim and Anthony what I wanted. Not knowing exactly what was being done for other candidates, I suggested the possibility of some support for my final two mailers and GOTV or persuasion calls. I was not aware that some candidates were receiving paid field operations or I probably would have added that to the list. They were fairly non-committal and referenced our “limited resources”. I was also told that it would cost $5000-6000 to do calls for my whole district. At that point, I said I would be happy to provide a smaller targeted list to fit whatever resources could be devoted to calls. I was completely flexible and willing to work within whatever parameters were necessary.

After a bit of time passed, I was told that they talked with State Party Chair, Joan Wagnon, about getting KDP support for one mailer. I did receive $1800 of support for a mailer with a total cost over $8,000. Unfortunately, this was not enough to counter the barrage of mailers sent out for my opponent shortly before the election.

Some skeptics might say I’m looking a gift horse in the mouth and should be happy that I was given something. I will concede that I received more than many others who got absolutely nothing. However, this small amount pales in comparison to the $45,000–63,000 devoted to other candidates. And, yes, I can’t help but wonder if I would have emerged victorious on election night if I had received this level of support. But, I am not upset because I didn’t win. This is not about my race in particular. I am upset because I believe we could have won more races and prevented the supermajority if better decisions had been made about how resources were utilized.

Leaving Money on the Table

We hear constantly about our limited resources. It is certainly true that we are not in a position to outspend the Republicans and their supporters. But when the stakes are so high and the outcome is tremendously important, leaving money on the table is not acceptable. I’m not going to belabor this point but will simply say that every group had thousands of unspent dollars that could have been used to support more candidates.

I was not privy to exactly who was involved in each of the decisions I have mentioned. If these decisions were based on polling, then I think we need to ask if the quality of our polling allows us to make the best decisions. However, if these decisions were made for other reasons (emotional, personal, royal family syndrome, etc.) as many might argue they were, then clearly those who made these decisions carry the weight of our failure to block the supermajority on their shoulders. Those who made these poor decisions now have to suffer through the agony of the right-wing supermajority. And, if they were the only ones who were negatively impacted, I could stand back knowing that they were receiving warranted karmic retribution for their actions. Unfortunately, they are not the only ones who will suffer from their missteps – every citizen of our state is affected. Because of this, it is important that every Democrat knows about the poor decisions that led to the disastrous 2–4 years we are about to experience, that we hold these individuals accountable, and that we do whatever we can to try to make changes that will prevent this from happening again.

Next: in part 5, I’ll discuss concerns that relate to all races and the party as a whole.