Before the recent Congressional recess, National debt and budget deficits were all we heard about for months. These are very serious issues that we need to address but they are not our most pressing problem. Our current focus should be on our lack of economic growth and how we get the economy moving again.

Sometimes we wrongly assume that everything financial is directly connected because we are given misleading information. Sensationalized news broadcasts discuss the national debt/deficits in the same breath as poor economic growth which indirectly implies that one causes the other. Not exactly. While our debt and deficit issues are a significant long-term problem that needs to be solved, we are currently paying the interest on our national debt and treasury bonds are still where investors put their money when they want to be “safe”.

Some economic impact is psychological

The biggest immediate impact that the debt/deficit situation has is when the media dramatizes these issues so much, people become scared. This lowers consumer confidence which negatively affects the markets because lower confidence levels indicate consumer reluctance to spend which, in turn, hurts businesses. When it comes to the economy, the power of positive (or negative) thinking has a very real impact.

Consumer spending is the biggest driver of growth in the U.S. economy, accounting for about 70% of our economy according to most estimates. Some criticize this figure, arguing it might not be quite that high because some spending is on non-U.S. products. However, regardless of the particular percentage, consumer spending is clearly a primary driving force in the economy.

In good times, we see the cycle of economic growth perpetuated. Consumers are confident and spending, which creates profits for businesses and corporations. Businesses can use these resources to create jobs and give raises to current workers. This puts more people back to work and gives current workers more disposable income. Corporations report profits, unemployment rates go down, and markets respond positively. This boosts consumer confidence levels which again promotes spending and round and round we go. 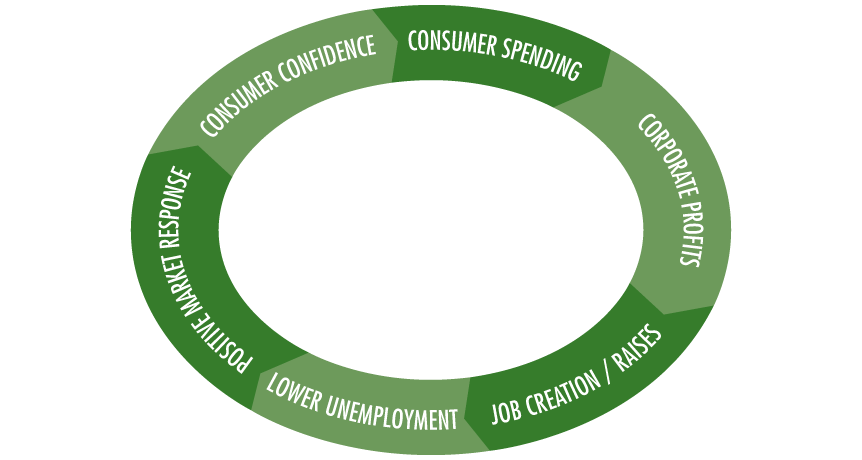 However, when people are out of work, haven’t received raises that keep up with the cost of living, or are worried about keeping their jobs, the economy takes a hit because people tighten their belts and cut back their spending. This is both a natural reaction and a personally responsible choice. However, the economic impact is very negative because, when people aren’t buying goods and services from businesses and corporations, profits suffer. When this happens, they don’t create jobs and may be forced to layoff workers. This causes unemployment to rise and consumer confidence to be shaken, which leads individuals to cut their personal spending further. This negative spiral works against economic growth.

The current stumbling block to improvement

We hear that we are coming out of the recession and that things are improving. There has been some ebb and flow, but overall consumer spending trends are up. However, unemployment rates are improving at a dead slow pace right now. So, what is the missing link? Why aren’t things improving more quickly?

Currently, our biggest barrier is that corporations are not creating jobs and replenishing their workforce. This would be more excusable if their profits weren’t so substantial. In July, the 2Q (second quarter) corporate earnings report was released, indicating a substantial upsurge in profits. Most corporations are in the position to hire back workers that they have lost and/or create jobs but they are simply not doing it. But why?

I frankly believe that some corporations are enjoying the current climate and plan to sit back and pile up as much cash as they can. Many companies cut back to a bare bones workforce during the heart of the recession by eliminating jobs and overloading remaining workers who were just glad to keep their jobs. People are still worried, job creation is not at an appropriate level, and getting another job is extremely difficult due to the number of folks competing for the small number of openings. All these factors create the perfect climate for exploiting your workforce by continuing to overload employees, many of whom are too scared to complain or wouldn’t be able to find another job if they tried.

Since it seems like those in the private sector (i.e., corporations) are enjoying their current profitable situation too much to do the right thing for the economy, how do we fix this and get the economy back on track? The government must initiate a jobs program – and soon.

You might be thinking… but won’t this add to our debt and deficit problem? Yes, in the short term, it will. (And mentally prepare yourself now for the demonization of any jobs program because it will require spending.) But as the old saying goes, “you’ve got to spend money to make money”. More people employed is not only good for the economy because it increases consumer spending, but it is also good for the federal budget because more employed people means more federal revenue. Every currently unemployed person who gets a job will be paying federal taxes as well as social security and medicare payroll taxes.

Long story short – if we can do enough to jump start our economy and get things moving in a positive direction, the positive momentum can build on itself and finally repair our damaged economy. If we don’t act, we are in for more of the same stalled growth we have now.