Although the Redistricting Committee composed of State Senators and Representatives did make the effort to hold hearings around the state to inform Kansas citizens about the upcoming process, it is not clear how transparent the redistricting process will be or to what extent citizen feedback will be solicited for proposed plans. We need a reasonable and fair redistricting process that involves Kansans in the discussion in order to achieve the best possible result.

The legislative standards for redistricting indicate that the state legislature should:

1. Ensure the districts include an equal number of citizens

2. Keep districts as compact as possible

3. Consider communities of interest and avoid splitting them whenever possible

This doesn’t seem like it should be that difficult if we are reasonable and use good judgment about what makes sense. However, at this point it seems that partisan considerations are overriding both the legislative standards and good judgment.

Senate Minority Leader Anthony Hensley exposed a redistricting plan that he strongly feels would be gerrymandering by wrapping the 1st district around the northern part of the state to include Wyandotte County (i.e., Kansas City, KS). He also noted that this plan violated the community of interest standard by splitting the Kansas City Metro and placing our most urban county in a district with western Kansas. Republican committee members denied knowledge of this plan that was supposedly developed in Washington D.C. 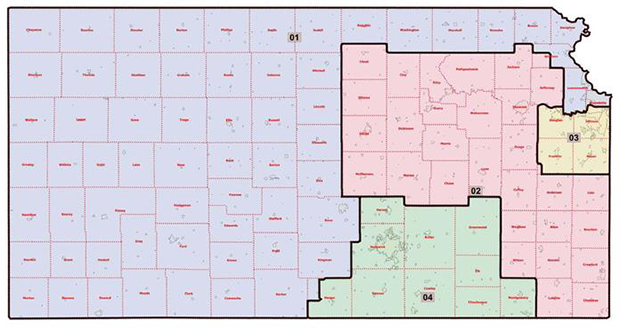 More recently, Steve Kraske indicated in a KC Star Prime Buzz blog post that a new map was drawing some support from Republican state legislators. This proposal seems problematic in that instead of having one district sprawling the width of the state, we would have two districts in this stretched condition. This newest map also combines Johnson County with southeastern Kansas which seems strange from a communities of interest standpoint. 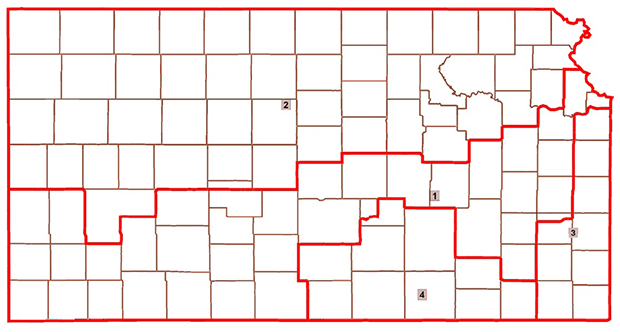 In my view, the current districts are not as compact as they could or perhaps should be. Keeping the district compact more easily allows citizens to travel to one of the office locations for his or her Representative and increases the likelihood of constituent contact. Enormous, sprawling districts reduce opportunities for citizens to interact with their Representative which is a tremendous disadvantage. In Kansas, we currently have a problem with 1st district sprawl that ideally should be addressed in the redistricting process.

Given the communities of interest standard, it seems obvious that the two counties that are part of the Kansas City Metro should be kept together in the same congressional district. I would suggest that this is one of the strongest communities of interest (if not the strongest) in our state. I cannot think of any motivation beyond pure political gamesmanship to separate Wyandotte and Johnson counties.

We need to take the legislative standards seriously and draw districts that are as compact as possible, that have an equal number of citizens, and that preserve communities of interest. Using the reapportionment data available on the US Census Website, I have created four different plans that I think have some promise. Please keep in mind that in the few instances in which counties must be divided, the lines shown are approximations rather than an exact representation of how the final lines would be drawn in order to keep small towns or communities in the same district.

This is the lowest impact plan in that it keeps as much of the current shape of the existing congressional districts as possible. The largest change is to the shape of the 4th district as the north side of the district would encompass counties that the Kansas Turnpike runs through.

The 3rd district retains a similar shape but loses part of Douglas County keeping only the 11,595 people needed for the appropriate population total. The remainder of Douglas County would move to the 2nd district. This would make the population of the 2nd district too large. To address this, Nemaha County and 4,208 people from Brown County were moved into the 1st district and Osage, Coffey, Woodson, and Wilson were included in the new Turnpike 4th. To create a compact shape, Lyon and Chase Counties were added to the 4th along with the northern portion of Greenwood County. Then to adjust population of the 4th district, Kingman and Harper Counties were moved into the 1st district along with 68,897 residents from the western portion of Sedgwick County. 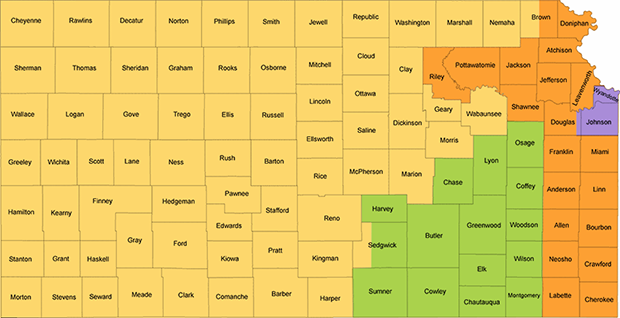 For those who might be concerned about dividing Sedgwick County, there is a reasonable explanation for this proposal. The western portion of the county is more rural. During my campaign for U.S. Senate, I spent quite a bit of time in Sedgwick County and learned that the western portion of the county (and even to some extent the western fringes of the Wichita Metro) identify much more strongly with western Kansas. So, splitting the county may actually benefit the region from the communities of interest perspective.

In this plan, the 3rd district loses only the portion of Douglas County needed to adjust the population as described above. The 2nd district takes on a more compact, column-like shape by moving Riley County and 16,356 residents of Pottawatomie County to the 1st district and adding the portion of Nemaha County not currently in the 2nd as well as Montgomery County to the southern part of the district. Because Montgomery County joins the 2nd district, Lyon County and the northern portion of Greenwood County are added to adjust the population of the 4th district. These additions put the district slightly over the 713,279 so only 944 residents of Kingman County are included in the 4th with the remainder of the county going to the 1st district. 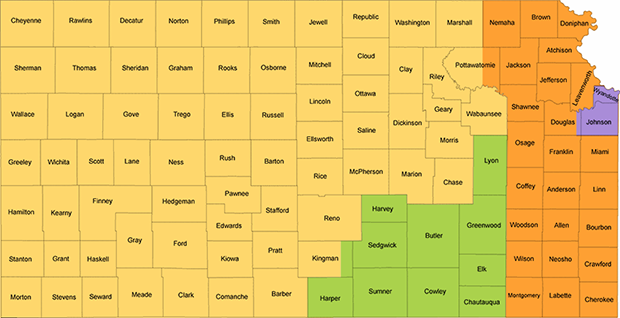 I know from reading about the Manhattan redistricting hearing that many in Riley County prefer to remain in the 2nd district. So, this plan may not be a favorite in that region of the state. Although I understand these concerns, some counties must move and I wanted to see if a more compact 2nd district was practical.

This plan retains both the 2nd and 3rd districts as described in the Low Impact 2 plan but creates a Central Kansas 4th district that takes on a more column-like shape. The portion of Riley and Pottawatomie Counties that moved to the 1st district in the previous plan would move to the 4th district along with Geary, Wabaunsee, Morris, Marion, Chase, Lyon, and the northern portion of Greenwood. To adjust population, Kingman and Harper Counties move to the 1st district along with 143,283 residents from western Sedgwick County. 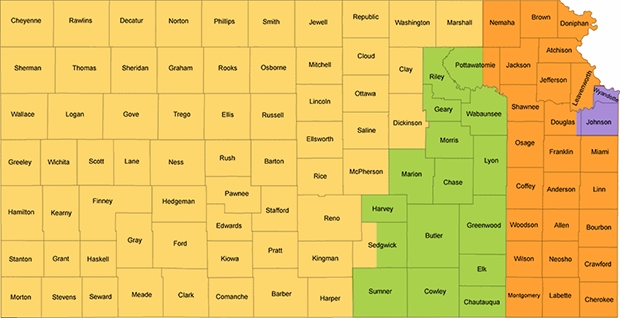 This plan offers the most change of the four plans by creating a 2nd district in the northeast portion of the state and a 4th district that encompasses a rectangular block of southeastern counties. The 3rd district remains as proposed. Half of Marshall (4,299 residents) and Nemaha Counties are added to the 2nd along with Geary, Wabaunsee, Morris, Chase, and Lyon Counties. The northern portion of Greenwood County along with Woodson, Allen, Bourbon, Wilson, Neosho, Crawford, Labette, and Cherokee Counties move into the 4th. In order to adjust population, Kingman and Harper Counties along with 28,902 residents of Sedgwick County are moved to the 1st district. 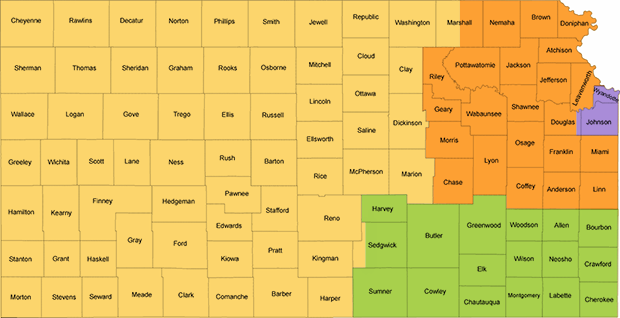 I think these four plans demonstrate that it is quite possible to create plans that are more in keeping with the legislative standards than the two we have seen thus far. It would be a colossal mistake to create districts that span the width of our state as this would place an undue burden on both the citizens and elected Representatives.

It is an abuse of power to disregard the standards in order to create districts that dilute one political party’s voting power by drawing odd swaths across the state. The two proposed plans are a blatant attempt to target and divide counties with a somewhat greater Democratic presence (i.e., Wyandotte, Douglas, and Shawnee). Redistricting should be about creating sensible districts that meet the legislative standards not stacking the deck for one political party.