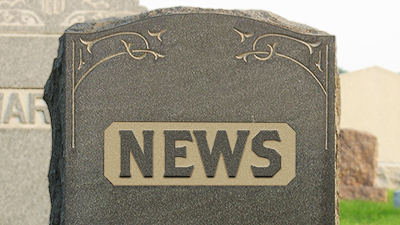 How can we expect people to make informed decisions when comprehensive, accurate, and objective information is becoming nearly impossible to come by in today’s media world?

Most of us know that television news programs have become quite sensationalized but not everyone knows how difficult it is to get coverage as a political underdog. Quite simply, those in the media are not giving you information about all candidates for public office. In our country, we believe that every citizen should be able to run for office. While you can put your name on the ballot, don’t count on the media gatekeepers giving you equal coverage. The unfortunate reality is that if you are not ahead or at least close in the polls, you can forget getting much if any media attention. The only exception seems to be if you do or say something completely off the wall, controversial or boneheaded.

As the 2010 Democratic candidate for U.S. Senate in Kansas, I kept waiting for the “liberal media” I hear so much about to show up and cover my race. I sent out many press releases and made many media contacts. But, alas, the liberal media never surfaced. MSNBC obviously leans left but they didn’t even cover the Kansas and Missouri primary elections. On the night of almost every other primary they had special election night coverage. But on the night of the Kansas and Missouri primaries, they simply went forward with their usual nightly programming. Those on MSNBC also spent much of their time leading up to November of 2010 talking about how Christine O’Donnell (Republican U.S. Senate candidate from Delaware) had once said she was a witch and poking fun at her level of competence. Apparently, they are not familiar with the saying that “there is no such thing as bad publicity”. If you talk about someone that much – even if you are making fun of them – you are still helping them get their name out. There were many other candidates that would have been very grateful to get a small fraction of the coverage that she received.

The Republican Presidential Candidates and Debates

At one point in the Republican Presidential debate on Monday night, Wolf Blitzer referred to the group on stage as “the” eight Republican Presidential candidates. This statement definitely gives the viewer the impression that you are seeing all the candidates. However, this is not the case. Buddy Roemer, former Congressman and former Governor of Louisiana, is also running for the Republican nomination. Given his background and experience, he is equally or more credible than several folks who were on the stage on Monday. However, as he mentioned in his interview on The Daily Show, he was denied the opportunity to participate.

It seems that the news sponsors orchestrate these events for the desired effect. For example, the MSNBC/Politico debate last week felt like the Mitt Romney and Rick Perry show. They were placed beside one another center stage and received the most opportunities to speak and answer questions. The focus seemed to be to create as much drama as possible between the two frontrunners with occasional questions to the chorus of additional candidates. These type of tactics influence who the nominee will be. If you give more attention to certain candidates, this increases their exposure and makes it more likely their poll numbers will stay strong or go up.

There are far too many “news” programs that are almost exclusively providing opinion. Fox News has been criticized on this front and in response they have indicated that some of their programs are news and some are opinion. This seems reasonable on the surface but, when your channel is named Fox News, most reasonable individuals expect the content to be news rather than opinion. Some people assume these broadcasts are sharing objective facts and they listen and weight the information accordingly. I cannot count the number of times I have heard someone repeat comments they have heard on an opinion program as if it were a fact even though it is not supported by the available data and information. If you doubt how much variability there is in the information that is presented, spend some time after an important event like a Presidential address switching between the coverage on Fox News and another news channel such as CNN or MSNBC. You’ll very quickly see that it sounds like each channel has been existing in a different reality.

The unfortunate reality seems to be that television “news” is mostly about ratings. Television stations want advertisers. To draw the big advertisers you need some of the best ratings. What gets you ratings?  People seem to watch controversial and outlandish stories the most. Viewers want kooky, strange, and dramatic. Facts and information are too mundane and don’t live up to our reality television benchmark. So the news organizations give people what they want in order to compete in the advertising world. Do we really want news coverage and our political world to be a soap opera?  Can we not separate shows like Jersey Shore and Real Housewives of (take your pick of locations) from what we need in a news program? It is depressing to realize that viewers are driving this lack of real news on television.

News – on its death bed

News is dying and we are killing it. We need to recognize that entertainment and news are not the same thing. What can we do to pull out the crash cart and jolt the heart of news into beating again?  Very simple – make the choice to watch programs that actually provide news and make your voice heard when you see biased media practices designed to shape viewer perception instead of providing information.