We have all heard various arguments about the revenue we need for a jobs program. The President has proposed that the wealthiest individuals and corporations should pay somewhat more in order to help get our nation back on its feet. However, Republican opponents have adopted their newest talking point (“class warfare”) to discourage the American public from seeing the merits of this approach. In light of the ongoing exchanges, I wanted to shed some light on the facts. In my article, The Real Job Creators, I discussed in great detail the fairly minor impact that a top tax bracket increase would have on individual take home pay for those earning over $379,151. So, in this article, I wanted to give some much needed attention to corporate taxation.

From Major Contributor to Minor Stakeholder 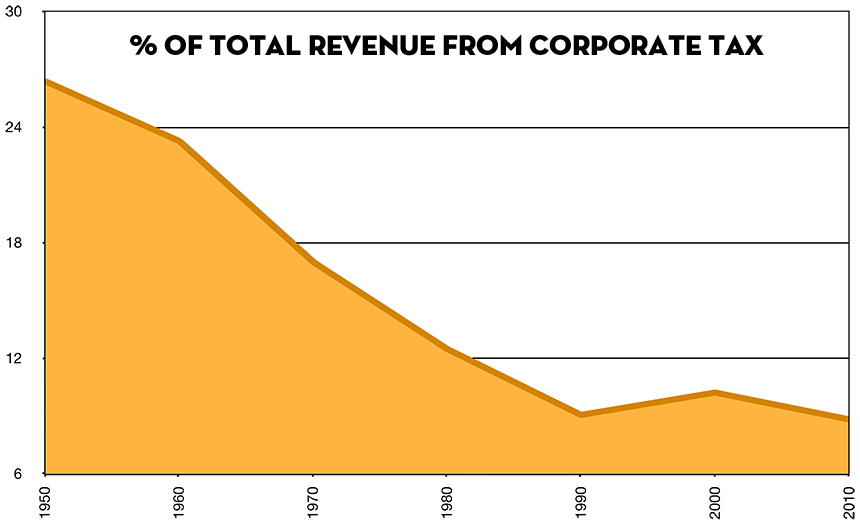 In contrast, the amount of total revenue represented by individual income taxes has remained fairly consistent over time falling between 40 – 50% (which means the correct answer to question 2 is B). In recent years, the percentage has fallen to substantially lower levels (41.56% in 2010 compared to 49.59% in 2000) due to both the impact of the Bush tax cuts as well as our ongoing higher levels of unemployment.

Another frequently used talking point is that “47% of Americans pay no income tax”. The implication is that these are all slackers riding on everyone else’s coat tails. However, in reality, there are many types of people in this 47%, including retirees drawing social security, individuals drawing disability benefits, spouses who do not work outside the home, unemployed individuals who are unable to find work, and wealthy individuals with talented accountants and tax attorneys.

Although it is true that some who qualify for earned income credit will receive an income tax refund for their withholdings, these individuals still contribute to federal revenue through social security and medicare withholdings. For example, a single person making $11,250 and a married couple with one child making $33,750 will qualify to get their income tax refunded. However, both households will pay 5.65% of their income for social security and medicare ($635.64 and $1902.92 yearly for each household). So it is incorrect to suggest that these individuals make no contribution to federal revenue.

Moreover, the individual making $11,250 would have a net pay of $821.11 monthly (in Kansas). Trying to pay for general monthly expenses (rent, utilities, gas, food, vehicle payment or maintenance, etc.) would be an overwhelming challenge. Allowing this person her $550 tax refund provides slightly over $45 extra per month. With gas prices where they are today, this is about one tank of gas for many folks. Clearly, these folks are not living high on the hog through earned income credits.

We hear this talking point about individuals not paying taxes. But where is the equivalent outrage for corporations that do not pay taxes? When it comes to individuals, the focus is on making those who have the least contribute more. However, we lose billions of dollars of federal revenue when corporations don’t pay taxes. Why is it a travesty that the person in the example above gets a small refund while corporations avoid or dramatically lower their million or billion dollar tax burdens?

Let’s talk honestly about shared responsibility. Frankly, corporations are not pulling their weight. The contribution to total federal revenue is a pitiful 8.83%. Now some Republicans have the audacity to suggest that we should eliminate corporate taxes entirely!

Although some individuals imply that we should be grateful to corporations because they create jobs for the people, this is a distorted way of viewing the situation. In fact, corporations should be extraordinarily grateful that they have the privilege to operate in the U.S. market. As I discussed in my article, The Path to Economic Recovery, consumer spending is a primary economic driver and accounts for about 70% of U.S. economic activity. It is this spending that allows corporations to rake in huge profits. And, it is these profits that allows corporations to create jobs and grow their business.

Corporations should feel obligated to contribute to the society that is providing the vast majority of their profits and allowing them to have tremendous success. It is completely ridiculous to suggest that corporations who benefit the most from the American economy should not share in the financial responsibility to keep our country strong. We need to move toward true shared responsibility not reprehensible, selfish greed.